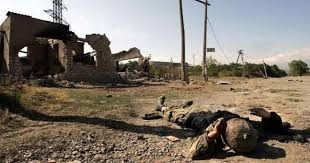 According to the Armenian media, the Azerbaijani side annihilated an Armenian serviceman, 25 year old Ashot Chobanyan as a result of the fights in the direction of Khojavend on the contact line of Azerbaijani and Armenian troops.

Noted that, Armenian Armed Forces have 112 times violated the ceasefire with Azerbaijan using 60-millimeter mortars, grenades and large caliber guns on the line of contact during the past 24 hours, Azerbaijan`s Defense Ministry said.