Armenia ignores the calls of the international community 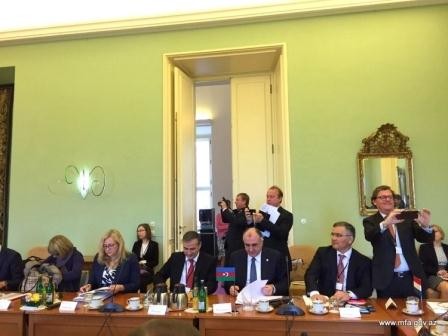 Armenia continues to ignore the calls of the international community for changing the status quo in the Nagorno-Karabakh conflict, Azerbaijan's Foreign Minister Elmar Mammadyarov said on May 4.

He made the remarks during the meeting of Ministers of Foreign Affairs of the Visegrad Group and of the Eastern Partnership countries in Prague.

Mammadyarov noted that provocative actions of Armenian armed forces on the contact line of Armenian and Azerbaijani troops in early April have led to an unprecedented escalation in the history of the conflict.

The Azerbaijani side has always clearly stated that the presence of Armenian armed forces in Nagorno-Karabakh and seven surrounding districts is the main cause of instability and frequent military clashes on the contact line, said the minister.

Azerbaijan is interested in resolving the conflict through negotiations, Mammadyarov said, stressing that the country’s "roadmap for peace and stability" is clear and based on international law.

Mammadyarov added that Azerbaijan, like the countries of the Visegrad Group and Eastern Partnership, will never make concessions on the issue of its territorial integrity.

“As required by the UN Security Council resolutions, Armenian armed forces must unconditionally withdraw from the occupied Azerbaijani territories and the safe return of IDPs to their native lands must be ensured,” he concluded.