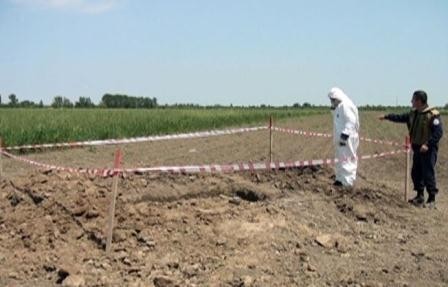 On their trip to the frontline, the crater of the prohibited artillery shell fired by Armenians was introduced to the military attachés.

Foreign Ministry spokesperson Hikmet Hajiyev told that up to 20 military attachés from 11 countries reviewed the crater of the prohibited 122-mm phosphorous artillery shell fired by Armenians. He added the shell will be documented and documents will be submitted to all international organizations.

“Let everyone see that Armenians shell Azerbaijani residential areas with a prohibited chemical weapon,” he said.

According to him, the OSCE monitoring group is expected to visit the site. “OSCE officials will review the site, and the chemical weapon will be neutralized right after,” he noted.

Note that during the late April escalation a chemical shell fired by Armenians fell in Terter’s Eskipara village.

Fortunately, it fell in a sown area. Generally, a phosphorous artillery shell ignites in the sun. Its smoke poses a life-threatening danger to all living things. The area hit by the shell is forbidden from being cultivated for a period.