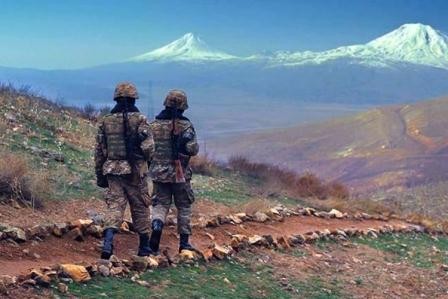 The ongoing exercises in the town of Aghdam controlled by Armenian forces involve armed vehicles and artillery pieces.

Artillery shells are hitting mountains and churning up a cloud of dust that is observed from the frontline. The sound of fire is also clearly audible in areas along the front line.

A fierce war broke out between Azerbaijan and Armenia over the Nagorno-Karabakh region of Azerbaijan. As a result of the war, Armenian armed forces occupied some 20 percent of Azerbaijani territory which includesNagorno-Karabakh and seven adjacent districts (Lachin, Kalbajar, Aghdam,Fuzuli, Jabrayil, Gubadli and Zangilan), and over a million Azerbaijanis became refugees and internally displaced people.

Dealing with the settlement of the Nagorno-Karabakh conflict is the OSCEMinsk Group, which was created after the meeting of the OSCE Ministerial Council in Helsinki on 24 March 1992. The Group’s members include Azerbaijan, Armenia, Russia, the United States, France, Italy, Germany, Turkey, Belarus, Finland and Sweden.