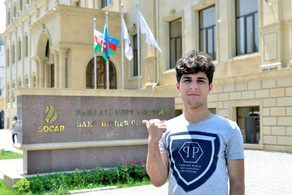 It was informed in Public relations department of the High School, showing the best results related to the first specialization group Tural Agayev, Ravan Nazaraliyev and Nadir Sultanli will study in the process automation engineering specialization of BHOS. Tural Agayev is a graduate of Turkish lycée in Baku. He was born in Zangelan. Tural’s mother is a housewife and his father is a worker. Ravan Nazaraliyev is a graduate of the secondary school N5 situated in Khirdalan. Ravan’s father is an automobile repair worker and his mother teaches math. It should be underscored that Ravan is not the only one from his family who scored high points. His siblings, Rashad who scored 677 points during the entrance examination for 2013/2014 Academic year and Nurlan with 685 points scored this year, were admitted to study at BHOS. Nadir Sultanli is a graduate of Ankara school. His mother is a housewife and his father works for BP.