Blair: 'Brexit can be stopped if voters decide' 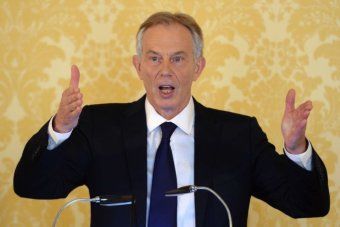 Former prime minister Tony Blair says Britain's exit from the European Union can be stopped if voters decide the pain of leaving the world's biggest trading bloc outweighs the benefits of leaving.

Mr Blair, who is pro-European, compared Brexit to "agreeing to a house swap without having seen the other house" and said access to the EU single market would define Brexit.

"It can be stopped if the British people decide that, having seen what it means, the pain-gain cost-benefit analysis doesn't stack up," Mr Blair, who served as prime minister from 1997 to 2007, told the New Statesman weekly.

"I'm just saying: until you see what it means, how do you know?" said Mr Blair, who added that he was not planning to return to British politics because of hostility towards him.

Mr Blair is unpopular in Britain for his decision to back then-US president George W. Bush's 2003 invasion of Iraq and the justification he used for going into a war that cost the deaths of 150,000 Iraqi civilians and 179 British soldiers.

The Brexit vote took many investors and chief executives by surprise, triggering the deepest political and financial turmoil in Britain since World War II and the biggest ever one-day fall in sterling against the dollar. While most British politicians agree the referendum result means a divorce must happen, some EU leaders have openly speculated over whether Britain might reconsider the divorce.

Prime Minister Theresa May has repeatedly said that "Brexit means Brexit" and that she will trigger the formal divorce negotiations by the end of March, though she is appealing a court ruling which forces her to give parliament the first say on pressing the exit button. "She's a very solid, sensible person but she's delivering Brexit. And she has to deliver it," Mr Blair said of Ms May. Otherwise she will lose the support of that very strong right-wing media. And they'll open up a rift in the Tory party again."

Some opinion polls have shown that support for staying in the EU has risen slightly since the referendum, though there is little evidence that supporters of Brexit regret voting to leave the EU.

Former prime minister John Major, who also campaigned for continued EU membership, told guests at a private dinner in Westminster that departure from the EU must not be dictated by the "tyranny of the majority", The Times newspaper reported.

While Mr Major accepted that Britain was not going to remain a full member of the EU, he said he hoped for a deal that would enable Britain to stay as close as possible to the union and what he called "the richest market mankind has ever known. I hear the argument that the 48 per cent of people who voted to stay should have no say in what happens," Mr Major was quoted as saying. I find that very difficult to accept. The tyranny of the majority has never applied in a democracy and it should not apply in this particular democracy."

He added that there was a "perfectly credible case" for a second referendum.