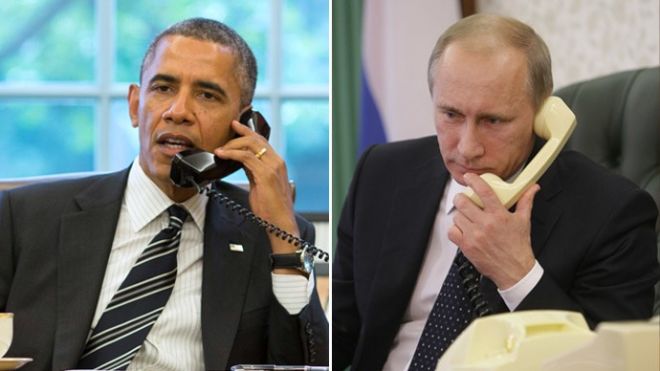 Determined to stop Russia's interference in the presidential campaign, at least one of President Obama's senior advisers urged him to make the ultimate threat to Russian President Vladimir Putin.

Mess with the vote and we will consider it an act of war.

But Obama opted not to issue a warning that specific when he spoke to Putin about the hacking during a September meeting at the G-20 summit in China, said intelligence officials offering NBC News exclusive new details.

The president didn't want to inflame an already tense situation, the officials said. Instead, he used less specific language to warn Putin of consequences if Russian interference didn't stop.

A month later, the U.S. used the latest incarnation of an old Cold War communications system — the so-called "Red Phone" that connects Moscow to Washington — to reinforce Obama's September warning that the U.S. would consider any interference on Election Day a grave matter.

"International law, including the law for armed conflict, applies to actions in cyberspace," said part of a message sent over the Red Phone on Oct. 31, according to a senior U.S. official. "We will hold Russia to those standards."

The so-called "Red Phone" system is used to communicate in moments of crisis, such as the September 11, 2001 terror attacks or the U.S. invasion of Iraq. Formally known as the Nuclear Risk Reduction Center line, it is no longer a literal phone, and instead sends email messages and attachments.

The Obama administration had never used the system before, officials said. Several intelligence officials told NBC News the use of the Red Phone communicated just how serious the situation had become.

"It's a dramatic step to pick that phone up and use it," said Ret. Adm. James Stavridis, the former head of NATO.

Did the Red Phone message work? "Look at the results," said an Obama administration official. "There was nothing done on Election Day, so it must have worked."

He meant that the nightmare scenario officials feared didn't occur: An attempt by Russia to manipulate the voting results or throw them into question.

Having lost a close election, however, senior Democrats don't see the White House pushback against Putin as a success. The Russians had already stolen reams of emails and used them to embarrass Hillary Clinton and the Democrats. Whether those revelations swung the election can never be known, but Democrats say they played a major role in an election decided by fewer than 80,000 votes spread across three states.