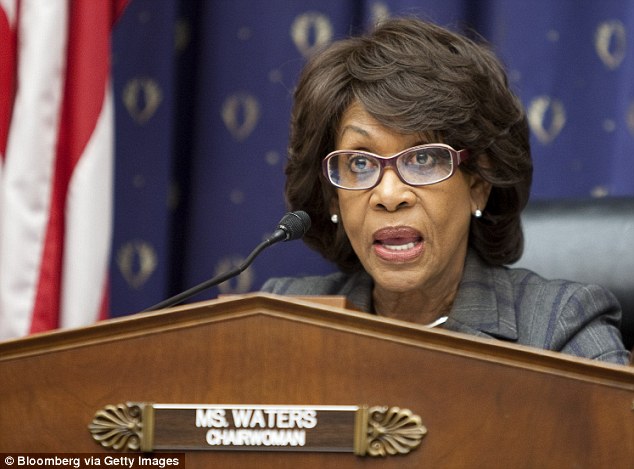 Waters made the claims on MSNBC on Thursday when she was asked whether she believed anything about the dossier that was leaked late last year suggesting the Russians had compromising information on Trump.

The California lawmaker did not provide any evidence of her claims.

'I think it should be taken a look at. I think they should really read it, understand it, analyze it, and determine what's fact, what may not be fact,' she told host Ali Velshi.

'We already know the part about the coverage they have on him with sex actions is supposed to be true.

'They have said that's absolutely true. Some other things they kind of allude to. Yes, I think he should go into that dossier and see what's there.'

Velshi then pushed the outspoken Trump critic for proof of her allegations.

'You say you think them to be true. How are we all going to find out what is true and what isn't true? Does it help that you think so? Because unless you have information we don't have, that's an allegation,' he asked her.

Waters responded: 'You understand that I am saying the investigations must be done, the drilling down must be done. We must get to the facts of what it has been about.

'I don't think you can do the impeachment just because I think or others think. But I think that if we do the investigations, that we will find the connections and I do think that impeachment will be necessary.'

It comes after her Democrat colleague, Congressman Adam Schiff, said this week he planned to seek testimony from the ex-British spy who wrote the unsubstantiated dossier containing the allegations about Trump.

Schiff of California said on Wednesday that he wanted to interview Christopher Steele for the House Intelligence Committee's investigation of Russia's meddling in the 2016 presidential election, Politico reports.

'If there's an issue about whether he's willing to come here, I'm more than willing to go there. But I certainly would like the opportunity to interview him as part of our investigation,' he said.