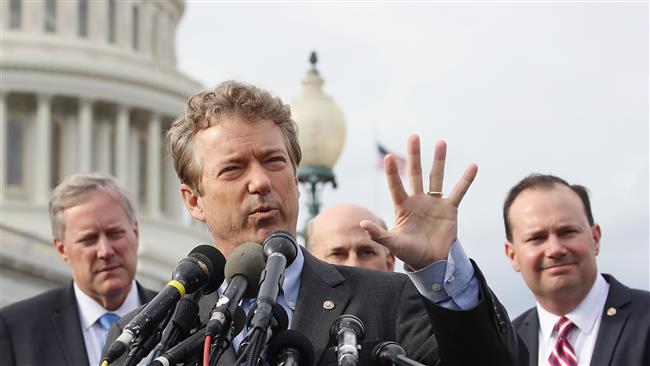 “I don't believe so. I think there's enough conservatives that do not want 'Obamacare lite,’” the Kentucky Republican said on ABC's "This Week."

“None of us ran on this plan. We ran on repealing Obamacare because it doesn’t work,” he added.

Republicans in the House of Representatives released their alternative plan, called the American Health Care Act, earlier this month.

Conservatives have criticized the GOP plan for keeping certain parts of Obamacare in place.

Sen. Paul vowed to vote against the legislation when it reaches the upper chamber for a vote.

House Speaker Paul Ryan said on Sunday Republican leaders were working to address concerns that had been raised about the legislation.

He said GOP lawmakers were introducing amendments to the bill to provide more tax credits for older Americans and add a work requirement for the Medicaid program for the poor.

Democrats have said the GOP healthcare plan would see millions of Americans lose their insurance and hurt the elderly, poor and working families.

President Donald Trump, who has repeatedly vowed to repeal Obamacare, agreed on Friday to add fresh changes to Medicaid.

"I just want to let the world know I am 100 percent in favor" of the measure, Trump said at the White House after meeting several House lawmakers. "We're going to have a healthcare plan that's going to be second to none."

Hospitals and insurance companies have raised concerns about the issue of affordability under the GOP healthcare plan.

Under its current form, the legislation would allow insurers to charge older Americans five times more than the young, putting at risk those who retire early.