McCain has insulted Lavrov and Putin 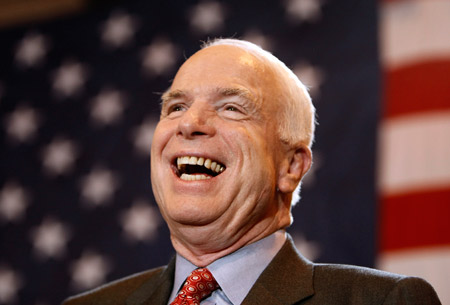 Senator John McCain said Sunday that Russian Foreign Minister Sergey Lavrov did not belong in the Oval Office for a meeting with President Trump.

McCain told host Chris Wallace on “Fox News Sunday” that Lavrov "had no business in the Oval Office."

The senator said the Russian foreign minister is “nothing but a propagandist” and a henchman for Russian President Vladimir Putin.

“Mr. Lavrov is the stooge of a thug and a murderer, who used Russian precision weapons to strike hospitals in Aleppo, who has committed human rights issues all over the place,” he continued, also citing Russia’s invasion into Crimea.

The New York Times reported last Friday that Trump admitted he fired FBI Director James Comey to take “off” some of the pressure when the president met with Lavrov and Russian ambassador Sergey Kislyak at the White House.

“I just fired the head of the FBI. He was crazy, a real nut job. I faced great pressure because of Russia. That’s taken off,” Trump reportedly said.

McCain on Sunday said he was "almost speechless."

“I don’t know why someone would say something like that,” he told Wallace.