Trump hits back at Merkel with warning for Germany 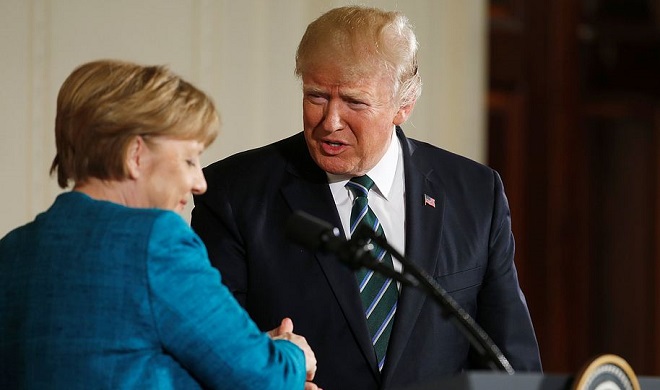 Donald Trump has hit back at Angela Merkel's recent comments about the unreliability of the US as a trading partner.

In a tweet, the US President said America had a "massive trade deficit with Germany" and warned: "This will change."

It comes after Ms Merkel said Germany can no longer rely on the US under Mr Trump's presidency.

Speaking at a campaign event held in a Bavarian beer tent, the German Chancellor emphasised the need for friendly relations with the US, Britain and Russia, but added: “We Europeans must really take our destiny into our own hands.”

Ms Merkel said that as the traditional western alliance is threatened by the new US presidency and Brexit, “the times in which we can fully count on others are somewhat over".

Her comments came after Mr Trump said he needed more time to decide if the US would continue backing the Paris climate deal, which has frustrated European diplomats.

On Monday, Ms Merkel again underlined her doubts about the reliability of the US as an ally but said she was a "convinced trans-Atlanticist", fine-tuning her message after surprising Washington with her frankness a day earlier.

Mr Trump has also been denounced as a "security risk for the West" by Thomas Opperman, the leader of the Social Democrats (SDP).

He said the US President and his administration "chatter too much" and could give critical information to Russia.

He added: “This is a dangerous situation. It cannot continue as it is. This endangers the information exchange and can be dangerous for both sides."