Azerbaijan and Pakistan suffer from aggression of neighbors 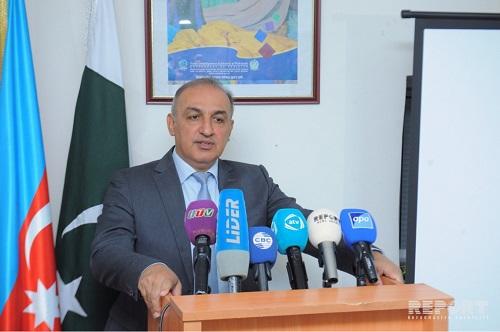 An event dedicated to the Day of Solidarity with Kashmir was held in Baku.

Axar.az informs, Pakistan’s ambassador to Azerbaijan, Said Khan Mohmand, told reporters that "Jammu and Kashmir, which are occupied by India, are the original Pakistani lands."

"Pakistan is calling for an end to the violence and violation of the rights of Pakistanis in Jammu and Kashmir," he said.

He stressed that as a result of the conflict with India, tens of thousands of Pakistanis were killed or severely discriminated when they could not freely practice their religious national rites and customs.

The ambassador noted that in this context, the fate of the peoples of Azerbaijan and Pakistan are similar.

"I am sure that the people of Azerbaijan are in solidarity with the people of Pakistan in the issue of Jammu and Kashmir as well as Pakistan sympathizes with and supports Azerbaijan in the Nagorno-Karabakh conflict. Because we experienced a similar tragedy, when some forces try to seize, appropriate our primordial lands”, - the diplomat said.

S. Mohmand stressed that India is trying to influence the demographic background of Jammu and Kashmir, in the same way as Armenia is trying to falsify history in the occupied lands of Azerbaijan.