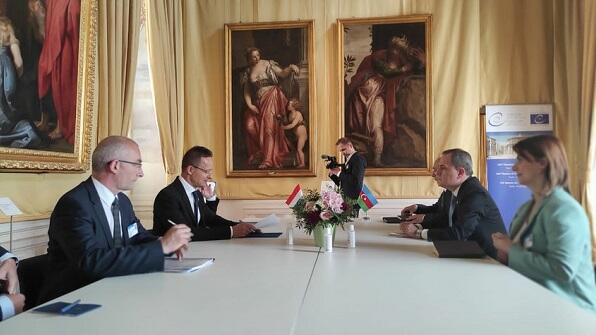 Azerbaijani Foreign Minister Jeyhun Bayramov has met with his Hungarian counterpart Peter Siyarto as part of the 132nd session of the Council of Europe (CoE) Committee of Ministers.

Axar.az informs this was reported by the Azerbaijani Foreign Ministry.

During the meeting, the ministers discussed issues of bilateral cooperation between the two countries in the political and economic spheres and exchanged views on regional and international security issues.

They noted the existence of high-level relations and political dialogue between the two countries. It was noted that there is potential for further development of relations in economic, trade, humanitarian, and other fields.

The sides stressed the importance of the Energy Forum to be held in Baku on June 1-3 this year, as well as the role of Azerbaijan in ensuring Europe's energy security.

During the meeting, the sides exchanged views on other issues of mutual interest.