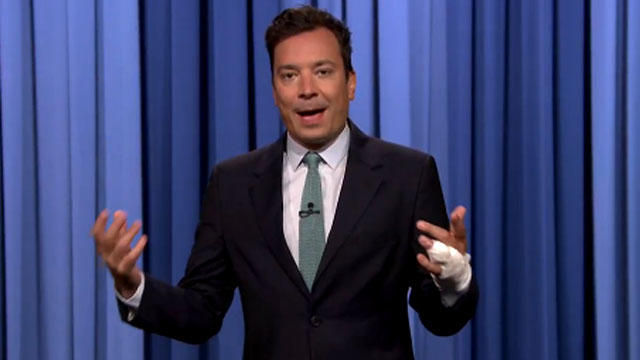 Jimmy Fallon promised there would be jokes about Donald Trump during Sunday night’s Golden Globes, and he wasted no time taking some direct shots at the president-elect during the opening monologue.

Fallon, who had a rocky start after his teleprompter failed (“Cut to Justin Timberlake please, and he’ll just wink at me, please,” he joked), noted the Golden Globes were “one of the few places left where America still honors the popular vote” — a reference to the fact Trump lost the popular vote to his opponent, Hillary Clinton, in last year’s election.

Later in the opening, while discussing Game of Thrones, Fallon compared Trump to Game of Thrones villain Joffrey, the vicious boy king from the HBO fantasy series who was killed in season 4. “What would it be like if King Joffrey had lived?” Fallon asked. “Well, in 12 days we’re going to find out.”

Trump’s inauguration is set for Jan. 20, and he’s had difficulty scheduling A-list stars for the event — a fact Fallon mocked by referencing the film Florence Foster Jenkins, which stars Meryl Streep as the world’s worst opera singer.

“Even she turned down performing at Trump’s inauguration,” Fallon joked.

He closed out the monologue joking that the accounting firm of “Ernst and Young and Putin” had tabulated the votes for Sunday’s winners.