Teen claims she is pregnant with Jesus 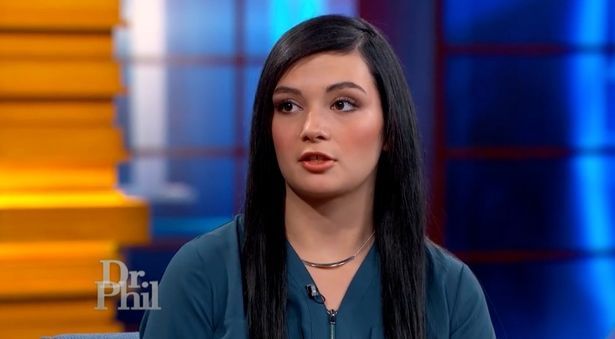 Kristi has had it up to here with her 19-year-old daughter, Haley. The teenager swears up and down that she is eight-and-a-half months pregnant with baby Jesus.

Haley has taken six pregnancy tests, and each one has come back negative. Kristi took her to a clinic and those tests came back negative too. Still, Haley is adamant that she is carrying the child of God. She says she can feel the fetus kicking inside of her.

"I know my pregnancy is real. I’ve gained at least 22 pounds," she said. "I was sleeping one night and my baby punched the bottom of my stomach and kicked me, and I can feel his head right here, right below my belly button."

However, Kristi tells a different story. She believes her daughter is a compulsive liar. Kristi says Haley has lied about being on American Idol, and has claimed that the rapper, Eminem, is her biological father.

"My family, my friends, my pastors at church, they don’t believe that I’m pregnant," Haley said. "I know it’s Jesus. I don’t care if my family disowns me. It really comes down to if you’re a true believer in Jesus or not… I don’t care what the home pregnancy test or a doctor says. When I give birth to my baby, no one is going to deny him because he’s my savior."

Haley appeared on the Dr. Phil Show to set the record straight. Dr. Travis Stork from The Doctors conducted an ultrasound. There was nothing. There was no baby. Dr. Stork told her that the movement she felt was from her distended bowels. She was not pregnant.

The teenager refused to believe Dr. Stork. In fact, she even cursed him out. However, there is some light at the end of the tunnel: It was revealed that Haley and her sister, Adriana, had an abusive childhood. While Adriana sought proper treatment, Haley never did.

Dr. Phil has provided Haley with a psychologist to get the healthcare she needs, and all parties are willing to do whatever it takes to move forward.