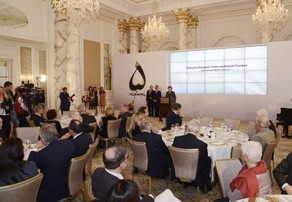 Tomorrow IV Global Baku Forum will be held under support of the State Committee for Work with Diaspora (SCWD) organized by Nizami Ganjavi International Center in the framework of cooperation with InterAction Council, Madrid Club, Bibliotecha Alexandrina, Roman Club, World Academy of Art and Science.

It was told in the press service of the SCWD, presidents of Albania, Montenegro, Bulgaria, Macedonia, Bosnia and Herzegovina, Georgia will attend the forum. In addition, participation of over 300 representatives from 53 countries, including of 27 former presidents and 23 former prime ministers is expected.

In the forum entitled 'Towards a Multipolar World' important issues such as role of interfaith dialogue in conflict prevention, migration, multiculturalism and integration issues, including role of radicalization and migration factors in ensuring global security will be discussed. Moreover, issues regarding future prospects of energy and global governance also entered into the agenda of the forum.

Notably, this is the fourth meeting, held under support of the State Committee for Work with Diaspora (SCWD) and organization of Nizami Ganjavi International Center.

All three forums have been attended and addressed by the President of the Republic of Azerbaijan Ilham Aliyev.