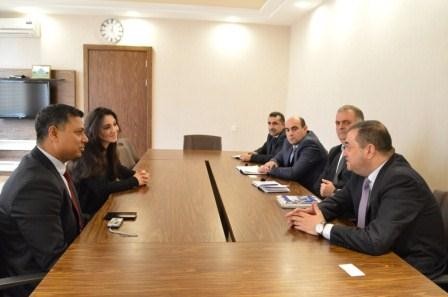 Indian Ambassador to Azerbaijan Sanjay Rana visited Astara, during his visit to the southern region, on February 9.

At the meeting with the head of Astara Region Executive Power, the ambassador was informed about the history, geography, employment, economy, socio-economic development and tourism potential of the region.

Addressing the meeting, Head of the Executive Power, Gazanfar Agayev said that, the similarity of nature of Azerbaijan and India opens great opportunities for expansion of cooperation between the two countries.

Speaking about the opening of the railway, which is part of the North-South transport corridor, G. Agayev emphasized the importance of exchange of experts in the field of tourism and agriculture.

The sides exchanged views on favorable conditions for foreign investors on socio-economic development of the region.

Within the visit, the Indian ambassador visited Heydar Aliyev Center and Historical-Ethnographic Museum in Astara and enjoyed the park-boulevard complex built on the Caspian Sea.