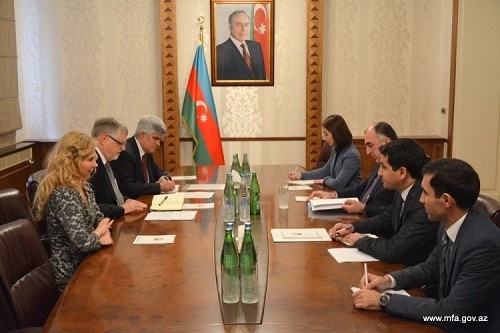 The ministry told that the sides exchanged views on the current status of the relations and prospects of development between Azerbaijan and EU, expressed mutual interest for the development of cooperation.

Briefing about the negotiations process over the settlement of the Armenia-Azerbaijan conflict with the mediation of the OSCE Minsk Group co-chairs, Minister Elmar Mammadyarov told that the conflict constitutes main threat to the regional peace and security. Noting that the current status-quo is unsustainable and unacceptable, Minister Elmar Mammadyarov added that for the resolution of the conflict as well as changing the current status-quo, first and foremost, the armed forces of Armenia must to be withdrawn from the occupied territories of Azerbaijan. Mentioning that ceasing the aggression of Armenia against Azerbaijan and withdrawal of Armenian troops from the occupied territories would be a necessary confidence-building measure, the Minister emphasized the importance of establishing contacts and dialogue between the Azerbaijani and Armenian communities of Nagorno-Karabakh region of Azerbaijan.

Noting that the EU attaches importance to the development of relations with Azerbaijan, Herbert Salber stressed the existence of good opportunities for the expansion of cooperation in variety of fields.

At the meeting the sides noted the partnership on energy issues between Azerbaijan and the European Union and the importance of “TAP” and “TANAP” projects which are the important components of “Southern Gas” corridor. They also discussed the issues of cooperation in science, education, humanitarian and other fields.

At the meeting, the sides exchanged their views on the regional and global issues of mutual interest.