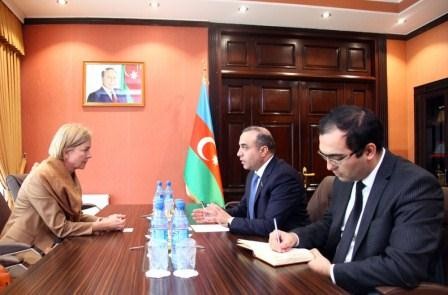 Ambassador of Sweden to Azerbaijan, Tajikistan, Turkmenistan and Uzbekistan Ingrid Tersman has met the chairman of the NGO Governmental Support Council under the President of the Republic of Azerbaijan Azay Guliyev.

Mrs. Ingrid Tersman informed about the existence of effective cooperation ties between the two countries in versatile fields, expressed desire to get detailed information about the current state of civil society in Azerbaijan.

Chief of the Council for NGO Support Azay Guliyev highlighted the organization’s consultative, informative, organizational-technical, financial and methodical activities in the country since it was founded in 2008. During this period the Council has financed some 4500 local and 60 foreign NGO projects. He also informed about the country’s legislature to regulate the mentioned sphere, transparency and accountability to provide coordination of activities.

Azay Guliyev noted that the international community bears responsibility for protraction in the process of negotiations on settlement of the Armenia-Azerbaijan, Nagorno Karabakh conflict. He criticized the inactivity of the OSCE Minsk Group, its unfair and ignorant stance in this problem.

Chief of the Council for NGO Support stressed necessity of increase of the efforts of the European political circles for quick settlement of the conflict, for it is a threat for peace and stability in the entire region.

Mrs. Ingrid Tersman stated that the problem was discussed during the recent visit of the Swedish foreign minister to Azerbaijan. The diplomat said the foreign minister’s visit would promote development of the bilateral relations between the two countries in the years to come.