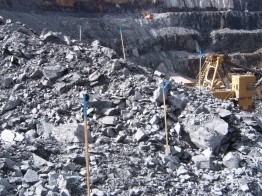 The Azerbaijani Anglo Asian Mining PLC (AAM) company and the Swiss Industrial Minerals S.A. have signed a contract for selling copper, which is being produced by the AAM's flotation plant.

"In March 2016, the company signed a new contract with Industrial Minerals S.A. for the sale of copper concentrate produced from its flotation plant," said the AAM message.

This contract is valid until Dec.31, 2018, and it is has the same terms as the company's existing contract with the exception of improved terms for any penalty due to the concentrate containing zinc.

The AAM company supplied 1,330 dry metric tons of copper worth $2.1 million in January-March 2016 (excluding the Azerbaijani government's profit share) versus 817 tons worth $1.3 million supplied in Q4 of 2015, according to the message.

Anglo Asian Mining PLC is a gold, copper and silver producer in Central Asia with a broad portfolio of production and exploration assets in Azerbaijan.

Based on the production sharing agreement signed with Azerbaijani government in August 1997, Anglo Asian Mining PLC has the right to develop six fields in south-west of Azerbaijan: "Gadabay", "Ordubad", "Gosha Bulag", "Gizil Bulag", "Vejnali" and "Soyutlu".

The gold produced at the fields is sent to Switzerland for purification. The ingots are delivered to Azerbaijan and stored in the government's account.