"Azerbaijan showed that the weapons bought will work" 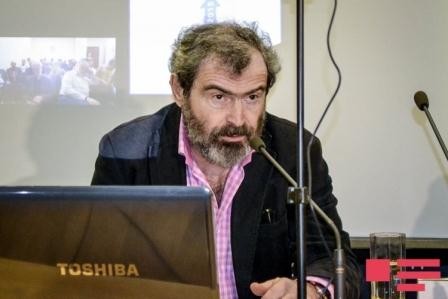 It was clear that one day, the weapons Azerbaijan bought will work. However, this was an unpleasant surprise for Armenia. Why did these weapons fire early April? There is no an unequivocal answer to this question. Azerbaijan confidently showed that its military rhetoric is not in vain and it hasn’t bought its weapons in vain.

Speaking about Armenia’s relations with Russia and the Collective Security Treaty Organization (CSTO), Dubnov mentioned that the “four-day war” in the Nagorno Karabakh clarified the relations: “It became clear that there is no unified opinion regarding Nagorno Karabakh within the CSTO. Therefore, it is in vain for Armenia to expect something from the CSTO in regard to the Nagorno-Karabakh conflict. We saw this in the example of Kazakhstan and Belarus in the latest events. It is well known that Nagorno-Karabakh is not an area CSTO bears responsibility for. This fact was proven once again during the “four-day war”. The same applies to the Eurasian Economic Union. The Eurasian Economic Union had to hold a meeting in Yerevan on April 8. But the meeting was put off without Yerevan’s consent. The postponing of the Eurasian Economic Union’s meeting without consent from Yerevan was a slap in the face for Armenia from member states,” he said.

Asked who has the upper hand after the first round of the military confrontation in Nagorno-Karabakh, the Armenian journalist Arkady Dubnov replied that the round ended in favor of Azerbaijan in terms of score.

“Azerbaijan broke the status quo and achieved its goal. Azerbaijan, by this means, showed the world that it is ready to wage a war. At the same time, Azerbaijan also proved successful in psychological, political, and diplomatic plan, drawing the world’s attention to the Nagorno-Karabakh conflict,” he said.