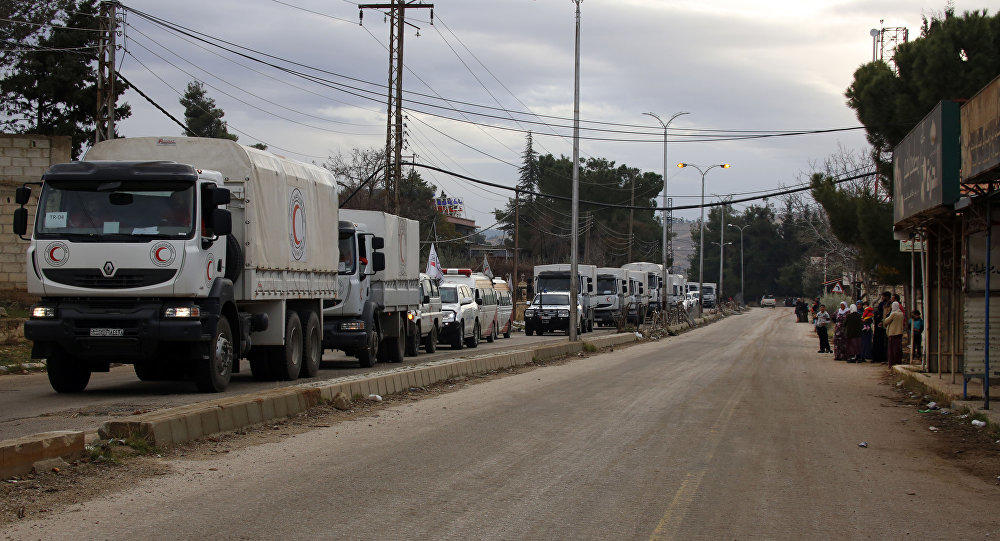 Firstly, the race between the Bashar al-Assad regime and U.S. forces has ended in eastern Syria, creating a new status quo based on the boundaries of the Euphrates River.

And thirdly, Turkey has managed to gain full control of Syria’s northern city of Afrin, thus increasing its influence in the region.

The most serious potential consequence of these developments is that the proxy war now underway in Syria could turn into a conflict between regional -- even international -- powers.

Any major military venture carried out by the regime and its allies could illicit a reaction -- not just by the YPG terrorist group but from the foreign powers that stand behind it.

On the southern front, the opposition-held Daraa province near the border with Jordan was designated a “de-escalation zone” following an agreement between Washington and Amman.

Having seized opposition-held parts of Damascus, the Syrian regime has turned its attention south, recently dispatching large numbers of troops to Daraa.

This has led to indirect talks between the U.S., Israel, the Syrian regime and Iran.

The presence of Hezbollah and other pro-Iran militia groups is the greatest danger for Israel, which has already carried out a number of airstrikes on Iranian targets inside Syria.

Iran, meanwhile, has been put in a corner by the recent U.S. decision to withdraw from the landmark 2015 nuclear deal between Tehran and the P5+1 group of nations.

What’s more, the Russia-Iran alliance appears to have recently come under strain.

Russian President Vladimir Putin recently hosted Bashar al-Assad in Sochi, where he announced that all foreign powers currently in Syria -- including Iran -- should eventually withdraw.

Iranian officials countered by saying that “no country can pressure us to withdraw from Syria”.

Russia has not yet persuaded Iran to leave the war-torn country. But it has ensured that pro-Iranian militias will remain between 70 and 80 kilometers from Israel’s borders.

Nor has Iran participated in any military activity along the southern front.

Should Russia secure an Iranian commitment to withdraw, the U.S. would leave the Al-Tanf airbase near Jordan’s border while armed opposition groups would hand areas under their control over to the Jordanian authorities.

Once the southern front is secured, two other regions will come under scrutiny: Idlib, which became a zone of influence for Turkey after the latter established a series of observation posts in the region; and YPG-held areas under U.S. protection.

Speaking to Russian media recently, Assad warned that YPG-held areas would be retaken “by diplomacy or by force”.

U.S. forces reportedly killed more than 100 Syrian troops, Iran-backed militiamen and Russian mercenaries when the latter attempted to move east of the Euphrates.

With this in mind, Russia is unlikely to make any moves east of the river that could lead to escalations with the U.S.

It is unrealistic to expect Iran to launch any major military operations in areas under U.S. protection.

The Syrian regime, meanwhile, may eventually return to southern Syria by striking a deal with the YPG.

If talks break down, however, the regime could wage a “war of attrition” against U.S. forces.

The regime, for its part, has warned the U.S. that it would face an “unsafe environment” in the event that it did not withdraw from the country.

Idlib is also on the regime’s radar. But Idlib is of crucial importance to Turkey, and any unilateral moves in the region could draw Turkish retaliation.

Turkey has placed military assets in Idlib within the context of an agreement between Russia and Iran.

While Turkey’s observation posts do not represent a military deterrent, the fact that Turkey remains in contact with both Russia and Iran will likely discourage any regime offenses in Idlib.

The outcome of U.S.-Turkey talks over Manbij will likely influence the regime’s next moves.

According to a Turkish-U.S. “roadmap”, the YPG should withdraw from the region, while Turkish and U.S. forces fill the vacuum.

Should the model prove a success, Turkey will push for a similar arrangement in eastern Syria.

If the Manbij model is successfully implemented, eastern Syria could eventually become a joint U.S.-Turkish zone of influence.

In this scenario, however, Turkish cooperation with Russia and Iran would be mitigated.

Deepening U.S.-Turkish cooperation could prompt Russian, Iranian and Syrian retaliation against the Turkish presence in Idlib.

In a second possible scenario, the U.S. may just try to buy time on Manbij, making token gestures in hopes of reducing pressure from Ankara.

Turkey would prefer to deal with the U.S. -- both in Manbij and east of the Euphrates. But if Turkey does not see any concrete steps in Manbij, its cooperation with Russia and Iran will likely deepen further.