Turkish army begins second round of patrols in Manbij 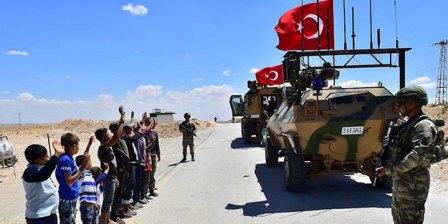 Turkish Armed Forces on Wednesday began a second round of patrolling in the northern Syrian city of Manbij as part of the objective to rid the area of the YPG/PKK terror group.

Armored vehicles belonging to the Turkish military entered near the Sacu river, which separates the Jarabulus region from Manbij.

The U.S. forces on the ground are also simultaneously conducting patrols across Manbij's northern Dadat district.

The first patrols by both Turkish and U.S. troops in the region began on June 18.

The Manbij deal, which was made between Turkey and the U.S., focuses on the withdrawal of the PKK-affiliated YPG terror group from the northern Syrian city in order to stabilize in the region.

The agreement was first announced after a meeting in Washington earlier in June between Turkish Foreign Minister Mevlut Cavusoglu and U.S. Secretary of State Mike Pompeo.

Should the model prove to be a success, Turkey will push for a similar arrangement in eastern Syria.

In its more than 30-year terror campaign against Turkey, the PKK has taken some 40,000 lives. The YPG/PKK is its Syrian branch.

Arabs account for more than 90 percent of the local population in Manbij.