The dos and don’ts of buying a huge TV 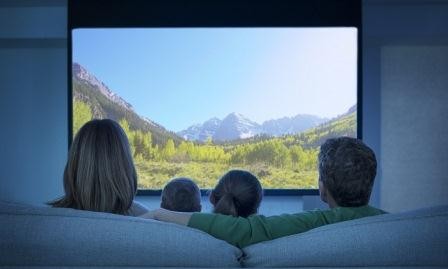 The big issue of the moment is how big your telly should be, sparked by broadcaster Justin Webb’s startling admission in the Radio Times that, with his disapproving wife away on a business trip, he sneaked out and bought a 65in job.

“I’ve finally bitten the bullet and bought myself a TV worthy of the name,” he says, dismissing the loathing of both TV and monster tellies as “the last refuge of the snob”.

“Etiquette expert” William Hanson, who recently wrote an article in the Daily Mail that included big televisions and cinema rooms in a list of “12 items you should never own”, says Webb’s revelation has not made him change his mind, and he is happy to plead guilty to the charge of snobbery. “Television is a downmarket medium,” he says. “It is not the high church of culture. So having something that is so ginormous in order to watch something that is already pretty downmarket is even more downmarket than the medium itself.”

“I’m with Justin Webb’s wife,” says Linda Levene, design director at LLI design. She reckons it’s a gender thing. “If it’s a man, they love huge TVs. If it’s a woman, they hate big TVs. I’ve never come across a woman yet who says: ‘Let’s go for the biggest TV ever’. Men love gadgets and they love showing off.” Size really does matter to men.