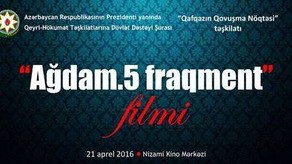 Aghdam. 5 fragments' film, which has been produced by Belgium's 'Merge point of Caucasus' organization with financial support from the Council of State Support to Non-Governmental Organizations under the President of the Republic ofAzerbaijan, has been presented.

According to the informations, film crew, MPs, representatives of international organizations and diplomatic corps attended the event.

Film Producer, Head of 'Merge point of Caucasus' organization Mishel Igor said that the calamities have been committed in Aghdam and these are terrible events.

Deputy, elected from Aghdam city constituency No. 118, Bakhtiyar Aliyev said that film producer Mishel Igor has professionally conveyed the feelings of the people.

The film has been demonstrated in the event. In the film, Aghdam residents tell the events.