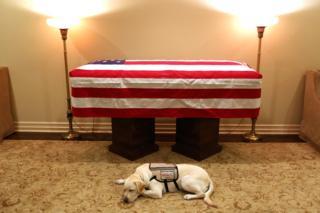 The golden labrador who worked as a service dog for President George HW Bush has been pictured resting beside his coffin, in a moving tribute.

Sully the dog will be travelling with the casket on the flight from Texas to Washington DC on Monday.

Mr Bush's body is due to lie in state this week ahead of a day of national mourning.

The coffin will be flown from Texas to DC on board Air Force One - temporarily renamed Special Air Mission 41, in homage to the late president - and then back on Wednesday, with Sully accompanying the body throughout.