The monitoring will be held on the contact line 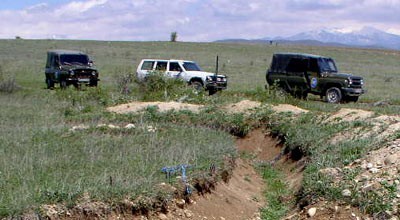 OSCE is expected to monitor the contact line between Azerbaijani and Armenian troops on Feb. 18, Azerbaijani Defense Ministry told.

The monitoring will be held under the mandate of the OSCE chairperson-in-office personal representative on the contact line between armies in the territory of Terter district, the ministry said.

On the Azerbaijani side, the monitoring will be carried out by the Personal Representative of the OSCE Chairman-in-Office Ambassador Andrzej Kasprzyk, field assistant of OSCE chairperson-in-office personal representative Jiri Aberle.

On the opposite side, the monitoring will be conducted by the field assistants of OSCE chairperson-in-office personal representative Yevgeny Sharov, Hristo Hristov and Peter Svedberg.