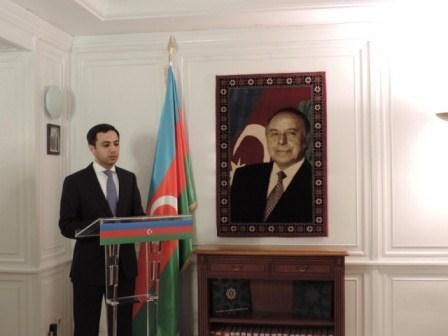 Azerbaijan`s Embassy to Spain has today organized an event to mark the 93rd anniversary of national leader Heydar Aliyev.

The event was attended by heads of Turkish, Kazakh and Ukrainian diplomatic missions in the country, members of the Spanish general public, journalists and Azerbaijanis living in Spain.

Addressing the event, Ambassador Anar Maharramov highlighted national leader Heydar Aliyev`s life and activity. He stressed the national leader`s role in protection of Azerbaijan`s independence and restoration of stability in the country.

Ambassador Maharramov said that it was national leader Heydar Aliyev`s returning to power that saved Azerbaijan from collapse and ended chaos in the country. “Initiated by far-sighted and experienced politician Heydar Aliyev, the ceasefire was agreed in 1994.” He stressed the role of rich energy resources in ensuring Azerbaijan`s independence, and pointed to the Contract of the Century which was signed in 1994 thanks to “tremendous” efforts of national leader Heydar Aliyev.

The Ambassador also underlined the national leader`s “unprecedented” services in strengthening the Azerbaijani state. “Thanks to the national leader`s efforts Azerbaijan became a full member of the Council of Europe in 2001, and the country embarked on close cooperation with the UN, NATO, European Union and other international organizations.”

He underlined that the Azerbaijani state grew stronger thanks to a rich political heritage and experience left by Heydar Aliyev, and added that President Ilham Aliyev continued this political line successfully.

Turkish and Kazakh ambassadors to Spain described Heydar Aliyev as a historical personality, and stressed the national leader`s role in protection of Azerbaijan`s independence and development of relations between the countries.

The event then featured a documentary in Spanish about national leader Heydar Aliyev. The participants also viewed an exhibition depicting the national leader`s life and activity. They also tasted samples of Azerbaijani cuisine.