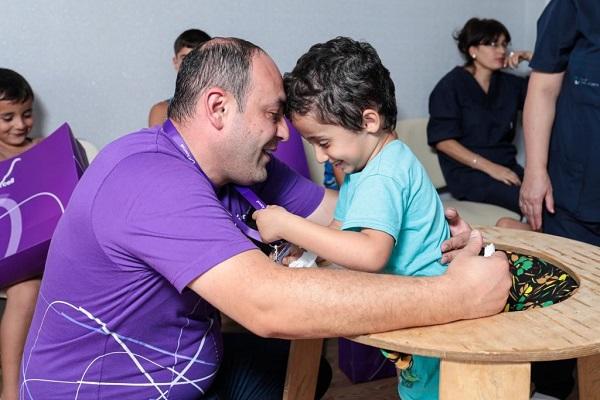 “Digital World in regions” project of Azercell, which succeeded to rally around thousands of people across the country, swimmingly continues its visits. The project that started from Nakhchivan, was met with great enthusiasm in Sharur, Ordubad, Guba, Khachmaz, Gusar, Sumgayit, Ismayilli, Shamakhi, Gabala, Goychay, Shaki, Zagatala, Barda, Mingachevir, and Yevlakh. The recent event within the confines of the project was held in Lankaran. More than 7000 attendees of the event had an opportunity to enjoy fun and intellectual games, try their best in virtual reality games, win various gifts and get acquainted with Azercell’s services and products that meet requirements of the latest trends.

Axar.az reports that Azercell representatives visited the children's neurological sanatorium in Mingachevir, on August 16 and the mixed boarding school named after O. Mirzayev in Lankaran, on August 19. Azercell presented school belongings and other gifts to the children. The “Mobile Dental” and “Mobile Eye” clinics of Azercell that have provided medical assistance to thousands of people since their establishment, also joined the visit and inspected approximately 40 children.

With the view to make the latest innovations accessible through high-speed internet, the choice of the majority of the mobile services’ users in the country Azercell, has strengthened and expanded the LTE network across Azerbaijan in 2018-2019. It should be emphasized, that the company invested more than 63 million AZN into the development of the telecommunication sector of the country in the first half of 2019. As a result, the company achieved 86.2% growth in population coverage and 61.4% in geographical coverage. Moreover, daily LTE data usage increased by 49.6%, while LTE download and upload speeds boosted by approximately 16%. Currently, about 60 cities and districts of our republic, including Baku and Absheron, are covered with 4G network.

Meet Azercell’s Digital World on 21st of August in Gazakh, 22nd in Tovuz, 24th in Shamkir and 26th in Ganja!