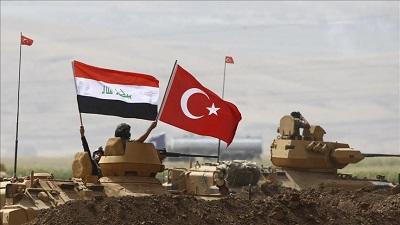 Turkey on Sunday expressed concern over the use of force in response to fresh anti-government protests in Iraq.

"We are deeply concerned over reports regarding the use of disproportionate use of violence against peaceful demonstrators and violent incidents occurring following the restart of demonstrations in Iraq's Baghdad and southern provinces," said the Foreign Ministry.

The statement said Turkey regrets the number of casualties that emerged amid the violence.

Turkey urged the Iraqi government to urgently “meet the legitimate expectations” of Iraqis and take steps to ensure peace and stability in the country.

Since Friday the capital Baghdad and other Iraqi provinces have been rocked by demonstrations against government corruption, unemployment, and a lack of basic services.

At least 63 people have been killed and more than 2,500 injured during the protests, according to Iraq's High Commission for Human Rights.

Anger has been building in Iraq in recent years due to rising unemployment and rampant corruption. Many in the country have limited access to basic services such as electricity and clean water.

According to World Bank figures, Iraq's youth unemployment is around 25%. It is also ranked the 12th most-corrupt country in the world by several transparency organizations.