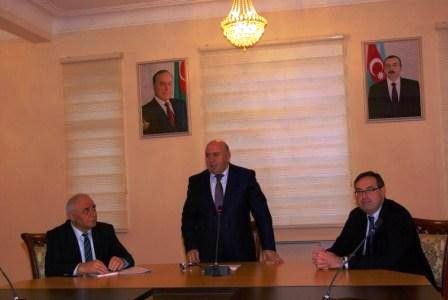 Rector of the university, professor Havar Mammadov spoke of the importance of publication, promoting and promulgation of the works and articles of scientists to the world's scientific community.

The rector stated that the “Thomson Reuters” has a special place among the world prestigious scientific publications. And that so far 229 articles of the scientists of ATU were published in foreign press, of them, 124 were placed in journals with impact factor.

Azerbaijani Ministry of Education and Thomson Reuters Agency last year have signed a cooperation agreement in the field of presentation and analysis of information for scientific research around the world.

Valentin Bogorov, Thomson Reuters Agency representative on CIS countries, informed that, his agency is an international corporation operating in more than 100 countries with some 60 employees.

Today, more than seven thousand leading universities, research institutes, government organizations, as well as private companies around the world benefits from the services of this agency, he added.

As stated, cooperation with the Agency will enable to subscribe to the 40 world higher education institutions, have access to the corporation's products and services.