SBS ships were equipped with the new facilities 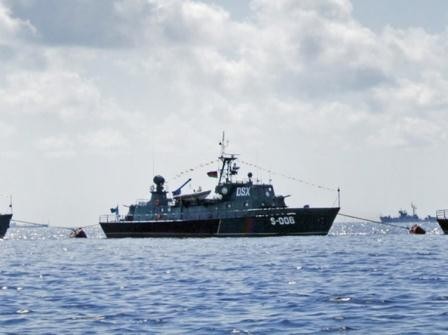 New artillery guns and anti-aircraft missile launchers were installed on ships of the Azerbaijani State Border Service (SBS) in order to prevent possible threats in the Azerbaijani section of the Caspian Sea, ensure the security of hydrocarbon production and transportation, as well as to improve the combat capabilities, said the Chief of the SBS Coast Guard, Major General Afgan Naghiyev.

He said Azerbaijan has achieved great progress in the protection of maritime borders in recent years.

“Important work is underway for the protection of maritime borders. Under the relevant order of the SBS chief, sea border posts and ports were transferred to the authority of the Coast Guard. Personal flotation devices were registered,” he added.

Nagiyev noted that the Coast Guard was involved in the elimination of consequences of the accident on the platform #10 of Gunashli oil field and in the search for those missing after the accident.

He added that 353 persons were detained for the violation of the maritime boundaries of Azerbaijan. “3 cases of drug trafficking were prevented. Fishermen were rescued from drowning in 4 cases,” Naghiyev said.