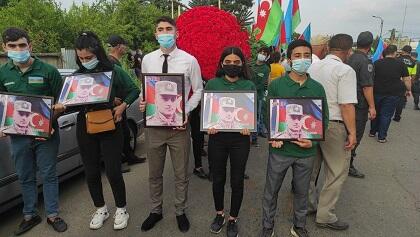 Axar.az informs that, the martyr's son-in-law was brought to Arkivan settlement of Masalli region, where he was born.

The funeral was attended by employees of the Ministry of Defense, the State Service for Mobilization and Conscription, the district executive power, law enforcement agencies, MPs, villagers, community members and family members of the martyr.

The martyred major of our army Novruzov Anar Gulverdi oglu was buried in the cemetery of Arkivan settlement.

It should be noted that 44-year-old Anar Novruzov was married and had a daughter and a son.

The Azerbaijani flag wrapped in the coffin of the martyr was handed over to his son.