Main reason for problems is non-compliance with int’l law 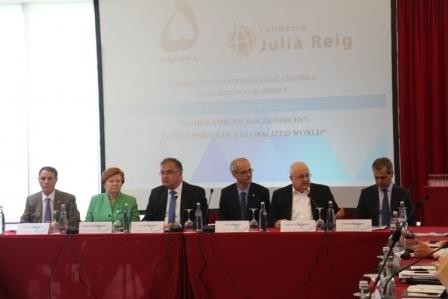 The main reason for the problems of the modern world is non-compliance with international law, said Novruz Mammadov, deputy head of the Azerbaijani Presidential Administration, chief of the administration’s foreign relations department.

He made the remark at the 8th Supreme Assembly of the Nizami Ganjavi International Center organized in Andorra June 13 with the support of Azerbaijan’s State Committee for Work with Diaspora, the committee told APA.

The top Azerbaijani official noted that a number of conflicts emerge as a consequence of non-compliance with international law.

Speaking about main problems and challenges of the globalization process, Mammadov mentioned that the international community is facing conflicts in the Middle East and the refugee problem in Europe.

“In the first place, these problems should be analyzed thoroughly. These issues are extremely important.

Thorough analysis of the underlying case should be the main purpose,” he said.

Mammadov also referred to recent terrorist attacks, noting that today all countries, including the US are facing this threat.

The meeting is being attended by member of the Presidium of Bosnia and Herzegovina Mladen Ivanic, Prime Minister of Andorra Antoni Marti, President of Latvia, co-chair of the Nizami Ganjavi International Centre Vaira Vike-Freiberga, Director of the Bibliotheca Alexandrina Ismail Serageldin, former secretary general of the Arab League Amr Moussa, former Serbian President Boris Tadic, Diplomatic Advisor to the Italian President Antonio Zanardi Landi, former President of Croatia Ivo Josipovic and others. Chairman of the State Committee on Work with Diaspora Nazim Ibrahimov also takes part in the meeting.