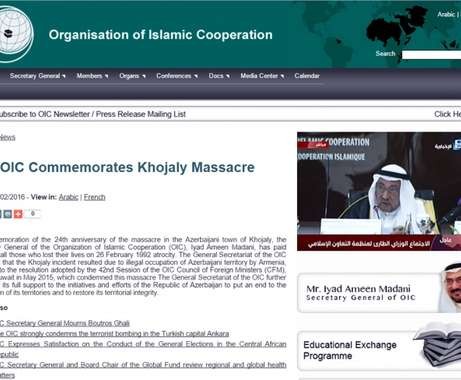 The Organization of Islamic Cooperation (OIC) has issued a statement commemorating the 24th anniversary of the Khojaly genocide.

The statement says that the OIC Secretary General Iyad bin Amin Madani has paid a tribute to all those who lost their lives on the night of February 25 to 26, 1992 atrocity.

Recalling the resolution on condemning the genocide adopted at the 42nd session of OIC Foreign Ministers Council, which was held in Kuwait in May 2015, the Secretary General emphasized that the tragedy resulted due to illegal occupation of Azerbaijani territories by Armenia.

The statement says that the organization fully supports Azerbaijan's initiatives and efforts to liberate its occupied territories and restore its territorial integrity.

Khojaly, the second largest town in the Nagorno-Karabakh region of Azerbaijan, came under intense fire from the towns of Khankendi and Askeran already occupied by the Armenian armed forces in 1992.

613 civilians mostly women and children were killed in the massacre, and a total of 1,000 people were disabled. Eight families were exterminated, 25 children lost both parents, and 130 children lost one parent. Moreover, 1,275 innocent people were taken hostage, and the fate of 150 of them remains unknown.