Cartoon about the Turkish game in Baku - Photo 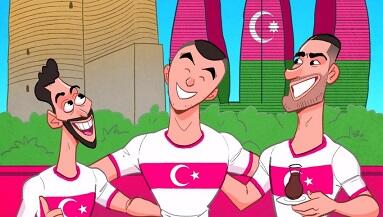 Famous cartoonist Omar Momani drew a picture of the Turkish national team's matches in Group A of Euro 2020 in Baku.

Axar.az reports that, the artist painted the Maiden's Tower and the Flame Towers on the shores of the Caspian Sea.

The picture reads: "I wonder if the brothers will be able to make the Turkish national team feel at home?"

It should be noted that the "moon-stars" will play their first match in the European Championship on June 11 in Rome against Italy. The Turkish national team will then play the other two Group A matches against Wales on June 16 and Switzerland on June 20 at the Baku Olympic Stadium.