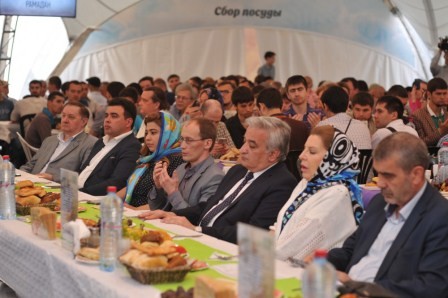 Vice-President of the Heydar Aliyev Foundation Leyla Aliyeva has organized an Iftar party in the Ramadan Tent opened by Russia's Mufti Council on the occasion of Ramadan on the Poklonnaya Gora, Moscow. The event also featured the Day of Azerbaijan.

Addressing the event, chairman of "Ikhlas" Foundation Anas Mammadov hailed the importance of the sacred month of Ramadan and the benefits of the fasting. The event also featured recitation of poems on Eid al-Fitr and singer Samir Salam's performance of religious songs and folk music.

Then, a sura from Koran and the iftar prayer were recited.

A letter of gratitude was read out on behalf of the Spiritual Administration of Muslims in Moscow addressed to Vice-President of the Heydar Aliyev Foundation Leyla Aliyeva for the organization of the Azerbaijani Night as part of the Ramadan Tent cultural and charity event.

Representative of the Azerbaijani Embassy in Russia Agshin Aliyev welcomed the event participants on behalf of Ambassador Polad Bulbuloglu, and underlined the importance of the holy month of Ramadan in Azerbaijan.

Deputy head of Moscow Mufti on Cultural and Educational Programs Rashid Akkaziyev thanked the Heydar Aliyev Foundation and personally Vice-President of the Foundation Leyla Aliyeva for organizing the event.

The event featured a video clip about Azerbaijan.

The Ramadan Tent is an important project of the Heydar Aliyev Foundation performed since 2009 by Russia's Mufti Council to strengthen friendship in Moscow and regions of Russia, bring together Muslim representatives of different nations living in the capital of the Russian Federation.