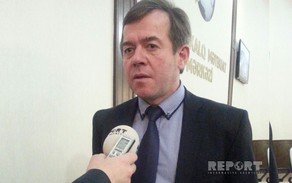 Baku. 25 February. REPORT.AZ/ The whole tragicalness of Khojaly tragedy lies in the fact that civilians were deliberately killed.

Report was told Ukrainian pilot Leonid Kravets, a witness of genocide committed by Armenians in the night from 25 to 26 February 1992 against peaceful population of Khojaly.

"In all wars, refugees allowed to escape, but not in Khojaly", he said.

According to him, the Khojaly tragedy does not require the recognition, it is already a fait accomplise: "Regardless of whether the international community recognizes the tragedy or not, the scale of it will not become less.Innocent people were killed", said L.Kravets.
According to him, the Khojaly tragedy is the eternal pain, eternal wound of the Azerbaijani people, pain which will never go away. Loss of hundreds of thousands of residents can not be accepted. That's awful", he concluded.