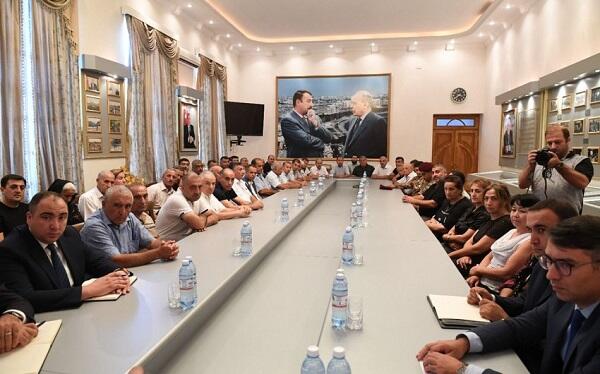 A meeting was held with a group of residents of Zabukh and Sus villages of Lachin region at the State Committee for Refugees and IDPs Affairs.

Axar.az reports that according to the information provided by the State Committee, the memory of the martyrs who sacrificed their lives for the restoration of the territorial integrity of Azerbaijan and the liberation of our lands from occupation was commemorated with a minute of silence.

The participants of the meeting valued the liberation of our lands from occupation by the brave Azerbaijan Army under the leadership of the President, Commander-in-Chief Muzaffar Ilham Aliyev as an unparalleled historical event, and once again emphasized with deep gratitude that the Victory gained made it possible for the former IDPs to return to their homeland. It was noted that the relocation of Armenians illegally settled in the Lachin region, where Armenia was forced to hand over without a fight, in the area temporarily controlled by Russian peacekeepers, is being carried out within the framework of the tripartite statement signed on November 10, 2020. It was reported that in connection with this, the head of our state gave an order to prepare the residents of the city of Lachin, Zabukh and Sus villages, who have been in the state of forced displacement for nearly thirty years, to return.