"FIG World Cup Final is very important for me" 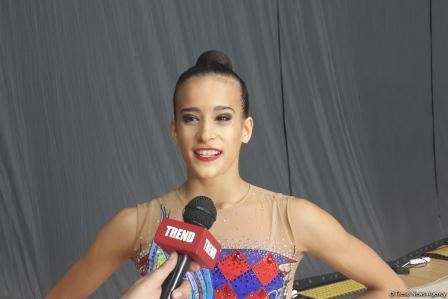 The Lebanese gymnast and the debutante of competitions Alice Sadek told reporters that the FIG World Cup Final in Rhythmic Gymnastics is very important for her.

Sadek said the first day of competitions was not very successful for her, but she hopes that the fans enjoyed her performances.

“I am the only gymnast representing Lebanon and I need to show my country and my capability,” noted Sadek.

The gymnast also thanked the fans for their support, adding that she was surprised when she saw the Lebanese flag in the hall.

Twenty-six gymnasts and 9 teams will compete for medals in the all-around on the first two days of competitions. Apparatus finals will be held on the event’s last day.

A traditional Gala will be held on July 24, as part of the FIG World Cup Final in Rhythmic Gymnastics in Baku.