Azerbaijan-China ties ‘develop’ in all areas 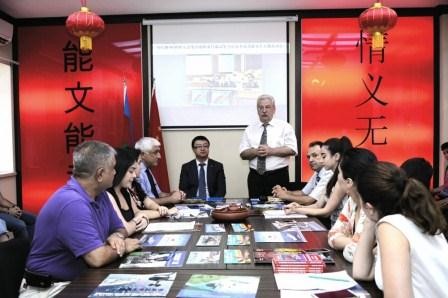 Director of the Political Department of the Chinese Embassy to Azerbaijan Chen Xinyin has hailed the relations between the two countries. “Chinese-Azerbaijani ties are developing on all fronts,” he told "Ensuring security of the Great Silk Road" seminar, which was organized by the Confucius Institute at Azerbaijan University of Languages (AUL). He also provided an insight into China's role in global military, political and geo-economic processes.

Azerbaijan`s former military attaché to China Nurulla Aliyev said the two countries enjoy “strong, friendly” relations. “Our countries maintain fruitful cooperation in a variety of areas, including military one. Over hundred Azerbaijani servicemen have attended different courses in China since 2004.”

Director of Confucius Institute on behalf of Azerbaijan Rafig Abbasov hailed Azerbaijani-Chinese ties as “friendly”. He stressed the necessity of expanding relations between the two countries within international and regional organizations. Emphasizing the geo-strategic role of Azerbaijan in the restoration of Silk Road, Abbasov pointed to the importance of ensuring security of the Eurasian transport corridors.