124 constituency election commissions to be re-formed 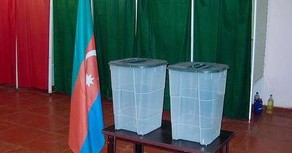 Report informs, the issue on re-formation of the structure of the constituency election commissions in the country was considered at the meeting.

Thus, the CEC has decided to re-form structures of 124 constituency election commissions. It was noted that composition of Agdash constituency No.90 has been re-organized during the parliamentary re-elections.

Minutes of the meetings of the CEC dated July 26 and 27, 2016 have also been approved in the meeting.