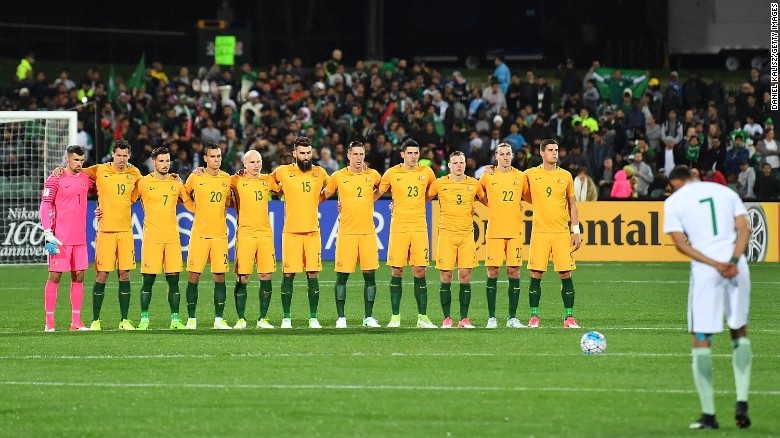 During a match in Australia Thursday night, the majority of the Saudi Arabian players continued to warm-up as the Socceroos stood arms linked and heads bowed.

The Saudi Arabian Football Federation said their players' behavior had not been intended to offend in a statement Friday.

"The players did not intend any disrespect to the memories of the victims or to cause upset to their families, friends or any individual affected by the atrocity," the statement read

Two Australian nationals, 21-year-old Sara Zelenak and 28-year-old Kirsty Boden, were among the eight killed in the June 3 attack on London Bridge and Borough Market.

Football Federation Australia said in a statement both the Asian Football Confederation and the Saudi Arabian team had agreed to hold a minute's silence before the match in Adelaide to pay tribute to the victims.

However, the FAA said it was "further advised by Saudi team officials that this tradition was not in keeping with Saudi culture and they would move to their side of the field and respect our custom whilst taking their own positions on the field."

"The local broadcaster, FOXSPORTS, was informed of this prior to the minute's silence taking place," it added.

A minutes silence was held in honour those lost in the recent terrorist attacks during the 2018 FIFA World Cup Qualifier match.

Australian Prime Minister Malcolm Turnbull told the Australian national broadcaster, the ABC, that he had not seen the video but had been told about it.

"The whole world, the whole free world is united in condemnation of that terrorist attack and terrorism generally and in sympathy and love for the victims and their families," he said.

In its statement, the Saudi federation said it condemned all acts of terrorism and extremism and extended its condolences to the families of the victims.

Seven people were killed and dozens injured when three men rammed pedestrians with a van on London Bridge, before jumping out and randomly stabbing people. Within 10 minutes they were shot dead by London police.

Australia eventually won the match by three goals to two.