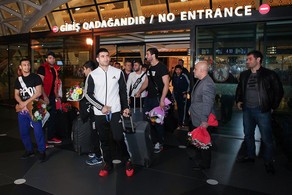 The Azerbaijani judokas, which won a set of medals at the European Championship in Kazan, Russia, have returned to Baku.

The judokas welcomed by Azerbaijan Judo Federation officials, members of the sports community, a group of reporters and fans at Bina Airport named after Heydar Aliyev.

Different slogans sounded for honor of the judokas.