Azerbaijan-Netherlands match will be in which arena? 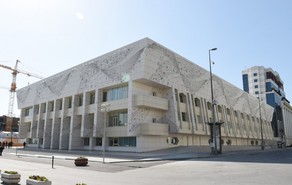 According to him, the match will be held on April 12 in Baku Sports Palace. The official decision will be announced next week.

Notably, the first meeting will take place in the city of Almere, the Netherlands' Topsportsentrum " on March 22.

The winning team after two games will qualify for the world championship on 10 September - 2 October, which will take place in Colombia.