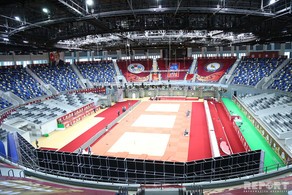 More than 80% of preparatory works have been done within the arena.

Officials of Azerbaijan Judo Federation visit the sports facility every day and control implementation of the works according to the proper level. According to the member of the Organizing Committee Elnur Ashrafoghlu, works are being carried out under the contract, signed with the International Judo Federation (IJF). The IJF officials have visited Baku 2 months ago and gave recommendations on the preparations to Grand Slam tournament, which will be held in the Sports Palace named after Heydar Aliyev.

Banners, frames and structures have already been installed inside the arena and in the grandstands. 5 cm judo mat, produced by 'Green Hill' and meets modern standards, has already been brought for the tournament.

Main attention focused on the organization of the opening ceremony, which will start on May 6 at 16:00 local time. An hour long event will consist of official and artistic parts. IJF President Marius Vizer, AJF President Rovnag Abdullayev, Minister of Youth and Sports Azad Rahimov are expected to address in the official part.

Composition, performed by Ukrainian dancers in judogis, mugham by People's Artist Mansum Ibrahimov as well as performance by Natig rhythm group are planned in the artistic part.

Another member of the Organizing Committee, former head coach of the judo national team Aghayar Akhundzade said that Azerbaijan will be represented by 4 judokas in each weight category.

Notably, in the framework of Baku 2015 European Games, European Judo Championship has been held in the Sports Palace named after Heydar Aliyev. Last year, not only judo contests, but also wrestling and sambo competitions have been held in the arena.

Grand Slam will be completed on May 8.