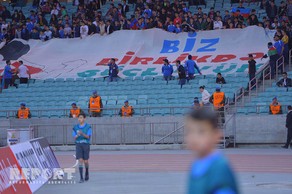 U-17 European Championship in Baku has registered a new record.

A Group match of Azerbaijan-Portugal was observed by 33 thousand spectators at the Olympic Stadium in Baku.

So far, the highest number of spectators was registered in Magdeburg, Germany in 2009 at the match of Germany-the Netherlands when 24,000 spectators observed the sporting event.

Azerbaijan national team has lost with the big score of 0: 5 at the European Championship in Baku.