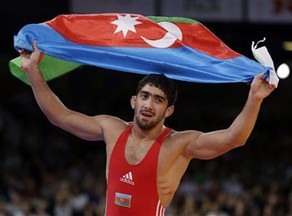 At Rio 2016 Summer Olympics, Azerbaijan will be represented by freestyle wrestler Toghrul Asgarov at 65 kg weight.

It was told by the 24-year-old athlete.

However, rivalry expected between T.Asgarov and Haji Aliyev at this weight category, T.Asgarov will participate in the Olympics as H.Aliyev lose weight to 57 kg.

T.Asgarov also told about his rivals in the Olympics: 'Trainings continue in order. I would like to distinguish last world champion Cuban-born Italian Frank Chamiso among them. Serious referee partiality was against me in the meeting with him. I will try to prove that I am stronger than him'.

T.Asgarov was one of two athletes, who won gold medal in 2012 London Olympics.

'I would like to carry our flag myself at Olympic Games. As it is a great honor. I will be very happy if bearing of the flag is entrusted to me', Toghrul Asgarov said.