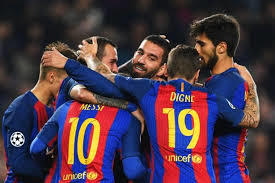 Bayern Munich will meet Barcelona in the Champions League quarter-finals after Robert Lewandowski inspired them to a crushing 7-1 aggregate win over Chelsea.

Having established a commanding 3-0 first leg lead at Stamford Bridge back in February, Bayern quickly made it 5-0 on aggregate when Lewandowski - from the penalty spot - and Ivan Perisic scored inside 25 minutes at the Allianz Arena.

Chelsea pulled a goal back through Tammy Abraham after a rare mistake by keeper Manuel Neuer, but Bayern's class shone through.

Substitute Corentin Tolisso made it 6-1 on aggregate when he volleyed home unmarked inside the six-yard area before Poland forward Lewandowski, who now has 53 goals in 44 appearances in all competitions this season, headed the fourth to finish the match with two goals and two assists.

Bayern will now face Barca in a mouth-watering one-game knockout format in Lisbon on Friday.