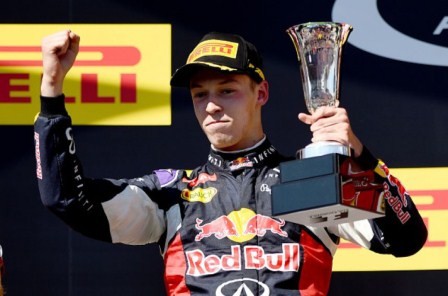 Toro Rosso driver Daniil Kvyat praised the new Baku City Circuit venue for punishing driver mistakes, and advocated for introducing more tracks like that to the F1 calendar, according to motorsport.com.

Kvyat, who had to retire from Azerbaijan's inaugural F1 race with a suspension failure, said he was glad to have a difficult, unforgiving track like Baku on the schedule.

"I think this kind of track - you need to be brave, you need to use your balls, so it's quite nice to see that," Kvyat said. "The tracks with the bravery, where you need to really attack on the limit but knowing that you can be punished really easily.

"I think, in all the modern tracks, this one is the one which we want to see more often. Of course, it doesn't have to be often racing on the street circuits, but let's say Zandvoort, Mugello - when I raced there four years ago with no run-off areas, or Imola - that's the tracks you want to see."

Zandvoort and Imola are both former grand prix racing venues, while Mugello is yet to host an F1 race, but has acted as Ferrari's test track.

Asked whether he believed Baku should be a blueprint for future F1 venues, Kvyat said: "Yeah, obviously, you cannot have a hundred percent of races on street circuits, but Zandvoort, Imola, Mugello, those kinds of tracks - where you need bravery.

"Abu Dhabi isn't bravery, it's [driving like a] robot. You go there, you brake too late, you locked up, you're upset because you locked up, you lost your lap - but there is no pressure to go off and smash your car."